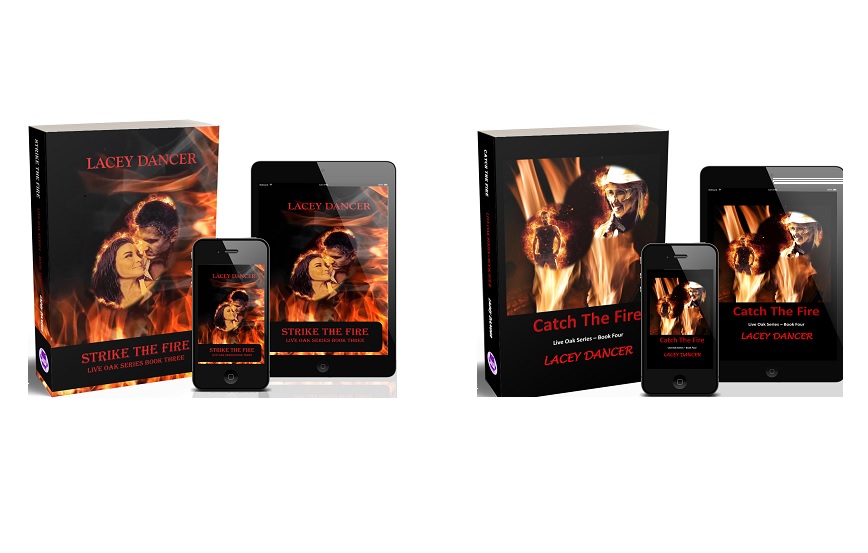 February celebrates love with The Live Oak Series. This series has become one of my favorites because of the diversity of the stories that occur in this small town setting. Live Oak is very real but the characters are truly figments of my imagination and it has been busy from the beginning. First, a stalker in Book One, Catch the Fire then an assassin in Book Two, Playing with Fire.

When I started Book Three, Strike the Fire, I wasn’t sure what would happen. I was working with Lydia North and Max Greene. Both had short appearances in the first two books. They were very determined to have their own story. I hadn’t planned on that at all.

For one thing, Lydia has already made it clear that she isn’t interested in any man long term. She is far more than a woman who owns an up-and-coming enterprise. She is just as capable of heavy machinery as she is behind her desk. Equally, she directs her crews with the finesse of a general marshaling his troops.

Add Max Greene to the mix and I was looking at two people who lived on opposite sides of the country and who had more in common than they thought. Max has two ex-wives and ABSOLUTELY no intention of getting serious ever again. He likes his house overlooking the Pacific. If he wants to be in the Caribbean one day and heading for Europe the next, so what. He owns enough airplanes that he can just pick one and take off, leaving his personal assistant in charge.  Women are great but the complication of one woman is so not on his agenda. However, making money is.

An unusual business opportunity appeals to the gambler in him. He has always loved a challenge and the expansion plan that is holding his interest demands a closer look. Enter a black-haired dynamo who could easily walk under his arm, who could sling a slender leg over her motorcycle she called Lighting and things heat up fast.

Lydia has lived in a man’s world too long to worry about the male towering over her. He might appeal to her body but she has a job to do and he wants to plant his feet in the middle of her construction project.

Neither of them counts on a hurricane roaring out of the Gulf of Mexico or the bombing of one of Max’s airfields. Add in two grown children and a life-risking rescue and the heat turns into ablaze.

Review for Strike the Fire (Amazon)

⭐⭐⭐⭐⭐ Ok, these books just keep getting better and better! Lydia and Max are such an awesome couple. Lydia is a strong independent woman that never thought of settling down and in walks Max and everything changes. Max is such a sweet romantic man you just can’t resist. I love the fact that in all the books in the series you’re still getting involved in the past character’s lives and are kept up to date with them. They have all developed a great friendship and respect for each other. And just let me tell you, Max and Lydia are smoking hot under the covers (wink wink). I have already started book 4 and it is gooood!!

Book Four, Catch the Fire, was a natural progression after Lydia and Max. RJ had to follow his boss, first out of pure curiosity to see firsthand one of the most ambitious projects that North Enterprises had contracted. Second, and the most surprising reason for arriving unannounced was Jackson, his own too damn personal thorn in his side.

When a hurricane provides a cover for a small child and her dying dog to escape horrible conditions in the only home she has ever known, RJ and Nancy come to the rescue. The tiny waif with boundless courage grabs both of them by the heart. They stand together to save the child’s dog which has been horribly abused almost to the point of death. The legal system has its rules and they don’t include the guardianship of two single people with no experience with children taking on Honey and her pet no matter how good their intentions.

United in their need to make a home for the child who had never known anything but pain and degradation, RJ and Nancy gather friends old and new to take on the system. Between them, they devise a plan. An unloved house and a judge who can see more than just the letter of the law are just part of the solution.

Review for Catch the Fire (Goodreads)

⭐⭐⭐⭐⭐ Another super read. This series has been a great example of small-town living. I have always lived in a small town so I can really appreciate this series. Ms. Dancer has captured the quality and equality of the people in this and most small towns. There will always be exceptions in all areas, in people, in attitudes, and in living arrangements and conditions. She always adds characters that you just fall in love with. In this book, there is Honey, the cutest, sweetest little girl, and her best friend, who is an abused little dog. They both will fill your heart with joy, Really!

I am currently working on the fifth book in this series, Light the Fire and I hope to have it ready for a late spring release. Cody, the sheriff, and Jennifer. one-half of the party planning duo are just determined to have their book.

If you have any questions or just want to chat about writing, please use my contact form to leave a message. I love hearing from all of you and I answer all comments personally.

If you prefer Smashwords, I would be delighted if you visit my author page